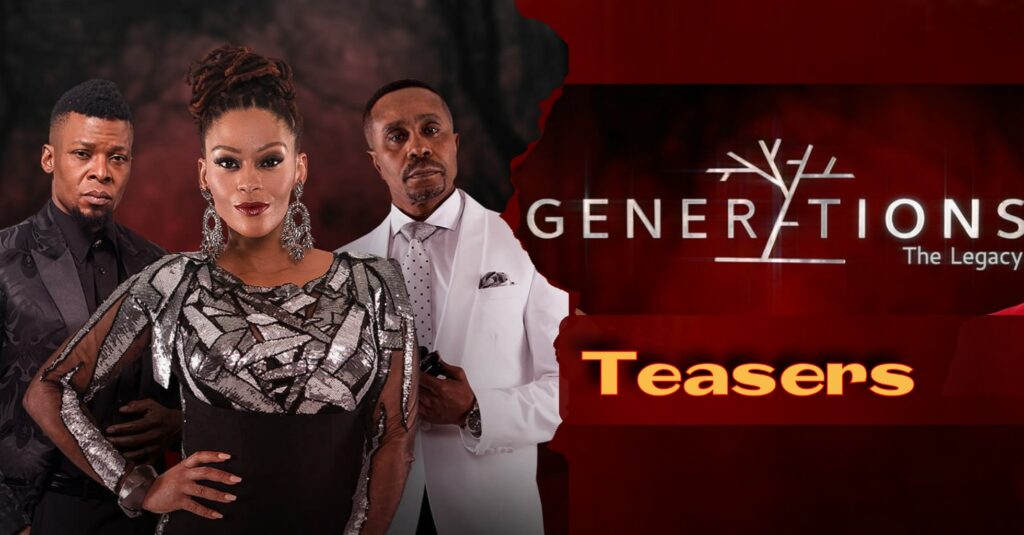 Generations the Legacy teasers for September 2021

High lights on Generations the Legacy in the month of September 2021.

Gog’Flo has had enough of the bad vibes at home. The more Gadaffi tries to reach out the more he gets pushed away. Living together can turn even the best relationship sour.

Fikile urges her worried friend to mark her territory. Lucy is shocked when someone steals a phone right under her nose and even more so by who it is. Another theft takes place only this time Nontle is behind it…

Mpho turns down a boring job offer. He has more exciting things in mind. Ayanda flips when she sees her daughter’s pics on social media. The girls get busy trying to clean the cash, unaware it’s absence has been discovered.

Lucy puts two and two together and gets eight. Gadaffi isn’t done testing his new protégé’s loyalty. Mbali gets the info she wanted but it’s not what she wants to hear.

Mavusana is happy to do a job for his old boss, albeit a very personal one. An old face returns to the commune and is shocked by the reception she gets. Mrekza picks the wrong time to lock up the study, catching his daughter in the act…

A devastating phone call comes in from the women’s shelter. Nontle fishes for info and is heartened by what she hears. Tshidi makes a horrifying discovery…

Zondiwe witnesses an altercation which unsettles her deeply. Ayanda doesn’t appreciate Zanele sticking her nose where it doesn’t belong. Pele is shocked to see who is out of jail and back on the streets.

An ominous warning leaves Lucy rattled. Linda makes her way home, blissfully unaware she’s being stalked. It’s late at night when a gunshot rings out in the commune…

Mrekza doesn’t suspect anything when he finds his wife chatting to a shebeen regular. A torn red shirt raises alarm bells for a shrewd cop. Will Mpho be able to go through with what he’s been tasked to do?

Mbali overhears a conversation and realises she has to act fast. Mavusana continues to plant doubts in Gadaffi’s mind. Nontle is taken by the delivery guy, blissfully unaware who he really is.

Lucy wants to teach someone a lesson he’ll never forget. Pele receives pictures on his phone which makes his blood run cold. Everyone is on edge after a listening device is found.

Zanele worries her partner might be hiding something from her… Mpho decides to get his own back. Ayanda can’t help herself and attacks someone in public.

Mrekza overhears something and confronts Cosmo who gives as good as he gets. Mbali’s conscience is eating at her. She can no longer keep up the lie. Thabiso feels the walls closing in…

Pele buys his lady flowers then receives devastating news. Mavusana is on the spot when a phone rings in his pocket… Lucy is floored to hear what Gog’Flo wants to do.

The Diales set a trap and end up crooking the crooks. Ayanda starts to second-guess her decision. Mpho’s caught between a rock and a hard place. Which way to go?

Zanele thinks her work partner is making a big mistake. Gadaffi takes his son’s involvement in his operations to the next level. Mbali learns the hard way that actions have consequences.

The stakes are high and so is the tension as the undercover operation draws to a head. The honeymoon phase is over for the reunited journalists. Are the cracks starting to show? Once a cop, always a cop.

Ayanda’s decision catches her man completely off guard. Mazwi has to pep talk an uncharacteristically nervous Fikile. Is Mpho crossing over to the dark side?

Nontle isn’t nearly as excited about her mother’s news as was expected. Kabisi has a bee in his bonnet and Tshidi is very worried. Pamela’s frustrated at work and at home.

Siyanda’s so excited about a tip-off he forgets all about his wife. Pele doesn’t know what to do about his wayward protégé. Cosmo and Mrekza’s horror stories don’t help matters at all.

No one notices the dark figure lurking around Siqalo Court… Mazwi advises his friend to walk away from his marriage. Sphe isn’t sure she’s doing the right thing by helping the Moroka elder.

Pamela directs another flying object at her husband’s head. Money exchanges hands – the hit on the unsuspecting victim must happen today. Kabisi insists on answers and feels physically ill when he gets them.

Related post: Get to know Tebogo from Skeem Saam

Disclaimer: Safrolebs is not the author of any teasers or spoilers even these Generations the Legacy teasers. Our teasers are all written by the authors and writers of Tvsa. We credit them for their work by backlinks.