The Queen actors and their ages

We all love our tv stars and celebrities because they entertain us. Sometimes we wonder of their real-life lifestyles, properties, spouses or their ages and etc. So we have decided to give you a glimpse of the Queen actors real life facts. In this post we will give you at least ten of The Queen actors and their ages. 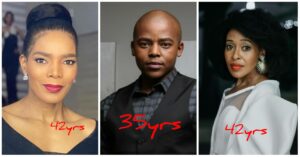 The Queen actors and their ages

Connie Ferguson from the Queen

Constance Ferguson is South African actress, film-maker, producer and business woman – well known as Connie Ferguson. She is popularly known for her Karabo Moroka from Soap Opera, Generations and currently play Harriet Mathapelo Khoza on the Queen. Born on June 10, 1970, she is 51 years old this year.

Themba Ndaba on the Queen

Themba is an actor known for casting on Machine Gun and series of Zone 14. He plays Brutus Khoza on the Queen, he was born on 14 February 1965, therefore he is 56 years old.

Sthembiso Khoza is a famous TV presenter who plays Shaka Khoza on the Queen. He was born in 01 July 1986 in Ntuzuma in KZN. He is 35 years old.

Zandile plays Vuyiswa “Sis Vee” Jola-Maake on the Queen she is also known to be an actress on Akua Yenana. She was born on July 06, 1979 in King William’s town. She is 42 years old.

Matu is an actress well known for playing What a shame (1989), had a role of Sis Bee on Rhythm City, she is currently playing Patronella “Sis Pat” Zulu on the Queen. She was born in 1966, she is 55 years old.

Sipho Manzini, Mjekejeke from the Queen

Sipho Manzini plays Jabulani “Mjekejeke” Zulu on the Queen. He is known for playing Mr Zondo on Broken vows. The star was born on 14 October 1964 so he is 56 years old.

Cindy Mahlangu is well known for playing along side Vincent Mahlangu (Simo Shabangu) as Violetta Mamba on Scandal. She currently plays Siyanda Dlamini on the Queen, she was born on 21 November 1996, so she is 24 years old.

Rapulana was born on 4 November 1967 is a South African actor and filmmaker. He is primarily known for his role as Tau Mogale in the long-running soap opera Generations. He Is currently playing Colonel Hector Sebata on the Queen. He is 54 years old.

Ntonda Duma is a South African actress and presenter. She was a presenter on craz-e world and she is known for playing Zinzi Dandala on Rhythm City. The star is currently playing Mpho Sebata on the Queen. Ntando was born on 29 August 1995 in Orange farm, therefore she is 25 years old.