The Estate Teasers February 2022. Here are the highlights of The Estate in 2022. 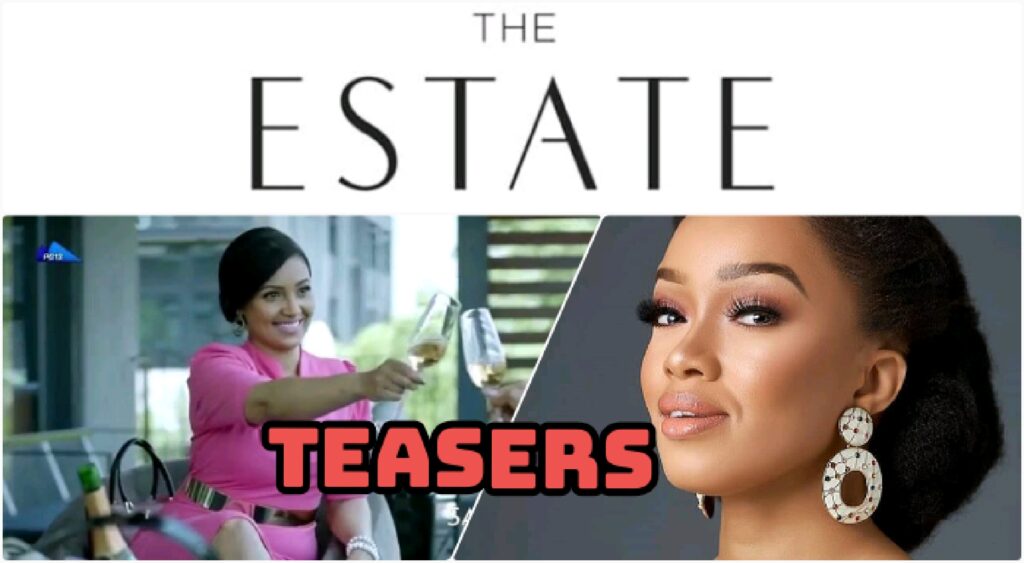 Muzi worries that Rethabile’s ritual has done more bad than good as Lwandle suffers another ‘episode’. Leah and Tessa plan their escape and Mmatshepo and Dumisani have a heart to heart.

Siya has a troubling dream, Chantelle’s fight with Ryan tests her sobriety and Lwandle’s sudden memory triggers a bad reaction.

Tessa and the girls’ escape plan is compromised, Tsholo and Mmatshepo hide their hustle from Dumisani, and Castro gets a surprise visit from Mmakoena.

Papa M sets his ultimate plan in motion, which puts Tessa and Leah in grave danger. Dumisani gate-crashes a Phakathwayo dinner to speak to his wife.

Dumisani confronts Ayanda about playing happy family with his wife. Jo confronts Martin after walking in on him and Chantelle. Amogelang arrives at Martin’s place with devastating news.

Tessa and Leah say their final goodbyes as time runs out while Jo prepares a police raid on the church compound in a desperate rescue attempt.

Castro makes Rethabile an offer that infuriates Muzi. Ntate Phasha notices that someone has been stealing from him. Mmatshepo is guilt ridden over her deception.

Lwandle confides a dark secret to Rethabile.  Lesiba says his final goodbyes at Sakhizwe. Tessa’s aunt insists that she comes to live with her after her ordeal.

Castro plots to keep Lwandle mentally compromised, while Lwandle makes a surprise announcement to the family and Dumisani cracks under pressure.

Siya discovers an ugly truth about Muzi and his parents. Castro uses Tessa for good publicity and the Mokobanes find themselves facing eviction.

Mmatshepo and Dumisani prepare to leave their house. Gigi is upset by the Phakathwayo vow renewal and Siya and Muzi come to blows over the past.

Mmakoena resigns from Castro’s council, forcing him to act. Lwandle questions her sanity after receiving bad press. Tessa’s nightmares spiral out of control.

Lesiba humiliates Mmakoena over Castro. Lwandle’s symptoms worsen but Muzi refuses to hospitalize her. Martin sees a patient even though he’s on suspension.

Muzi calls Castro for help when Lwandle digs up a buried truth and Jo witnesses suspicious activity on the Estate.

A life or death situation has Martin make a big romantic gesture while Lwandle leads Jo to a hidden grave.

A desperate Muzi tries to stop Jo and the police from digging up the grave while Mmatshepo and Dumisani learn about the discovery of a body on the Estate.

Castro and Muzi force Lwandle into silence. Jo makes an unsettling request to Dumisani and Mmatshepo fears for the worst.

The DNA results put Siya in the crosshairs of the law. The truth about Shadrack is revealed and Martin is off to a bad start with Jo’s sister.