Highlights on Skeem Saam in March 2022 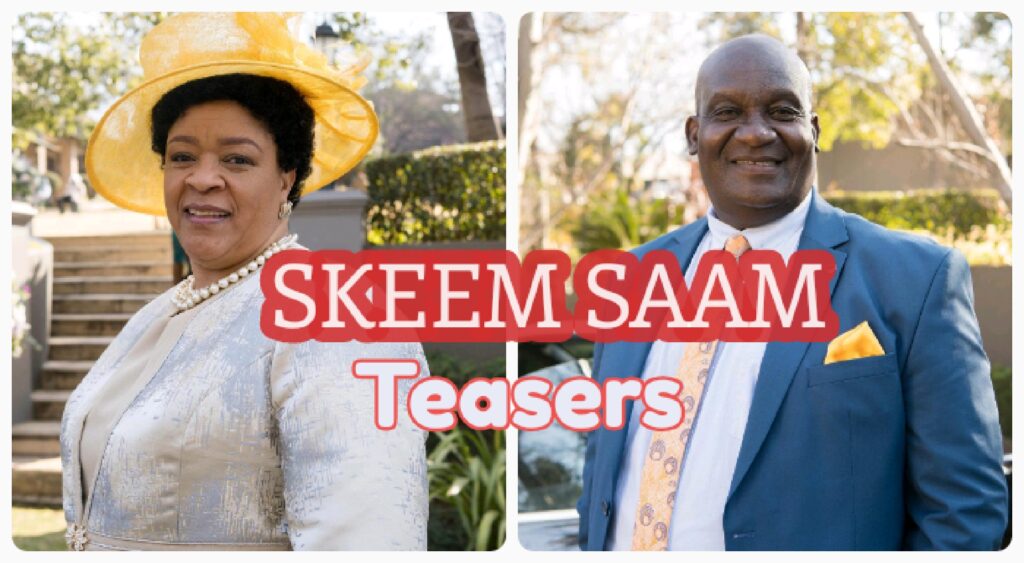 When John tries to put an end to the flirtation, Melita calls him the “L” word. Eunice goes on a new adventure with zeal. Alfred is finally able to take a breather. MaNtuli pays a surprise visit to Meikie in prison. To keep up with the Joneses, Alfred spins even more lies. Eunice breaks work protocol and doesn’t seem to mind.

The Maputla sons are on the verge of a physical brawl. Nimza goes above and beyond for his parents. Eunice is on the verge of breaking protocol once more. John can’t keep his hands off the forbidden fruit. Alfred is afflicted by the fact that his adversary prospers. Rovuwa shares turn out to be a bargain. Eunice has finally gotten it right.

John is being hemmed in by the walls. Rovuwa employees are facing layoffs. Eunice wants to find new ways to make money.

Melita learns that her life is in jeopardy. Lehasa and Phomolo have a feeling Khwezikazi is hiding something. Koloi requests his older crush for her phone number. The darkest fears of Kwaito and John appear to be coming true. Khwezikazi appears to be one step ahead of Lehasa. Pretty opposes Eunice’s plan to find out what a previous lover’s intentions are for her.

Everyone is jittery about the potential of Meikie’s freedom. Khwezikazi tracks down Kgosi for Lehasa in the midst of the lobola saga. Eunice is still worried about her finances. For Meikie and Melita’s Monday rendezvous, everything is in place. When Lehasa sees the State’s witness list, he is taken aback. Eunice declines Emkay’s assistance with Fanie’s encrypted file.

Melita learns some unfavourable news about her job at the Maputla grocery. Petersen catches Lehasa off guard by serving her with yet another search warrant. Eunice finds herself in an awkward predicament in front of her ex-boyfriend. In the midst of a flurry of activity, a secret love affair is unintentionally disclosed.

A plot twist is revealed by a detective seeking justice. Eunice is too proud to tell a coworker about her financial difficulties. In her search of the truth, a nosy journalist is unyielding. Kgosi reappears, but Petersen is one step ahead of Lehasa and Khwezi. An inexperienced newcomer is in hot trouble after exaggerating her abilities.

Melita and John’s affair reaches a certain inmate. Mr Moloi is protected by Eunice at her own expense. Lehasa is challenged by Khwezikazi to quit being so gentle. Melita wishes to tell the adversary her side of the tale. Phomolo threatens Lehasa’s close ally with being thrown under the bus. Lizzy makes an attempt to be her sister’s keeper, but she is rebuffed.

When John throws a bombshell on Meikie during his visit, she is taken aback. Khwezikazi has a solution to all of Lehasa’s issues, but he is torn between two options. Eunice makes a lot of money as a side hustler.

Melita tells Turf Times her side of the tale – the Phumeza version. Lehasa is adamant about what he wants to accomplish with Café Rovuwa. Eunice’s debt mountain continues to grow. Melita seeks for another public platform to correct the record. Lehasa’s trial has been postponed due to a murder. Eunice is only burdened by pay day.

A unhappy former lover airs her dirty laundry on national television, but her opponent exposes her flaws. With a search and cease warrant, Petersen silences a smug Lehasa. Eunice is irritated by a coworker who meddles in her personal affairs. Melita has remained a thorn in John’s side. An ex sends Lehasa a note of consolation. Eunice is concerned about a new supervisor who appears to be frantic.

Meikie unintentionally owes Octavia money. Koko’s strategy to safeguard Kat comes at the expense of another. Lehasa overhears Fanie discussing where the money she stole could be.
Leeto fights his mother’s conflicts while in Turf alongside Joy. Charles makes a significant discovery. Elizabeth issues an ultimatum to Eunice.

Meikie’s cellmate has a nefarious scheme in mind for her. MaNtuli realises that her working days are dwindling. Eunice’s alienation from those who care about her continues. For Meikie, Octavia is preparing the worst type of betrayal dish. Lehasa’s plans for Café Rowuva have been postponed, and he is frustrated. Eunice pays off her debt with the help of a close friend.