In this article we have listed Diep City cast and also their ages.

Diep City is a South African telenovela about the struggles of four young women who were forced into crime while in high school just to make ends meet and trying to make their way into this world. The show is produced by Black Brain Pictures and airs on Mzansi Magic from Monday to Friday at 20h00. 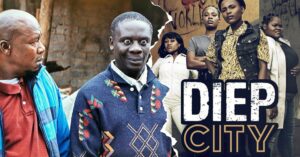 Dawn Thandeka-king plays Thandiwe she was born on 1 October 1977 thus she is 43 years old. Her birthplace is Eshowe in KwaZulu Natal Province in South Africa. She is a South African actress, musician and motivational speaker. Thandeka-King finished her drama studies at DUT (Durban University of Technology).

Ncayiyane plays Nox he was born on 8 November 1994. He is 26 years old. is a South African theatre and television actress, Influencer and a Life Coach. Famous for her role on etv’s Scandal as Phindile. Pretty was born in Port Shepstone in Kwa-Zulu Natal.

Mduduzi Mabaso plays Mgedeza. He is famously known as Suffocate Ndlovu on Rhythm City but he is now a Diep City cast member. The star was born on 1 April 1976, he is 45 years old.

Tshiamo Molobi plays Sibusiso on Diep City. He was born on 17 May 2003 thus he is 18 years old. He is the only child to single mother Ida Molobi; was brought up in Fourways Johannesburg.

Hamilton Dlamini portrays Bonga, he was born on 15 December 1969, he is 51 years old. He is an actor best known for his television roles as businessman Korea in the SABC1 sitcom Mzee wa Two Six (2005) and as Prosper in the SABC1 drama series Mzansi.

Zikhona Bali plays Asanda on Diep City, the star was born on 07 June 1985 therefore she is 36 years old. She was born in Mthatha, Eastern Cape in South Africa. Bali is known for her recurring role on SABC 1’s Mfolozi Street as Ziyanda.

Kgaogelo Monama was born on 11 May 1990 so she is 31 years old, the star plays Lerato on Diep City a Character which has made her prominent. She was born on Vosloorus, Gauteng Province in South Africa.

Nompumelelo Vilakazi was born on 20 October 1997, she is 23 years old. The star plays as Snenhlanhla on Diep City. She was born in KwaZulu Natal Province in South Africa. When she left KZN for Jozi in order to pursue her acting dream she didn’t receive much support from her family because they were sceptical about the idea.

Obed Baloyi was born in 1970, he is 51 years old. He plays Ringo. He was born in Soweto township in the Zone of Diepkloof, Gauteng Province, South Africa. Baloyi was raised by both parents in Diepkloof Zone 4 where he used to sell vegetables and fruits with his mother.

Vele Manenje was born on 11 March 1988 she plays Maureen on Diep City. She is 33 years old. Vele was born in Venda, Limpopo Province in South Africa. She was raised in Tembisa, Johannesburg where she attended public schools and learned all South African official languages and to speak them fluently.

Mzikayise Makroti was born in 1976 so he is 45 years old he plays Fistos on the drama series of Diep City.

Luyanda Shezi was born in 1994, she 24 years old and she plays Lungile on Diep City.

Moshine Mametja plays Ausi Mary on Diep City she is 26 years old therefore she was born in 1994 or 1995.

Phindile Thongo plays Ntswaki on the show of Diep City but no age of hers is yet known.

Akhona Ndlovu plays Herbert on Diep City. As Diep City cast member, Akhona is still on the rise and still to shine brighter, he is 24 years old.