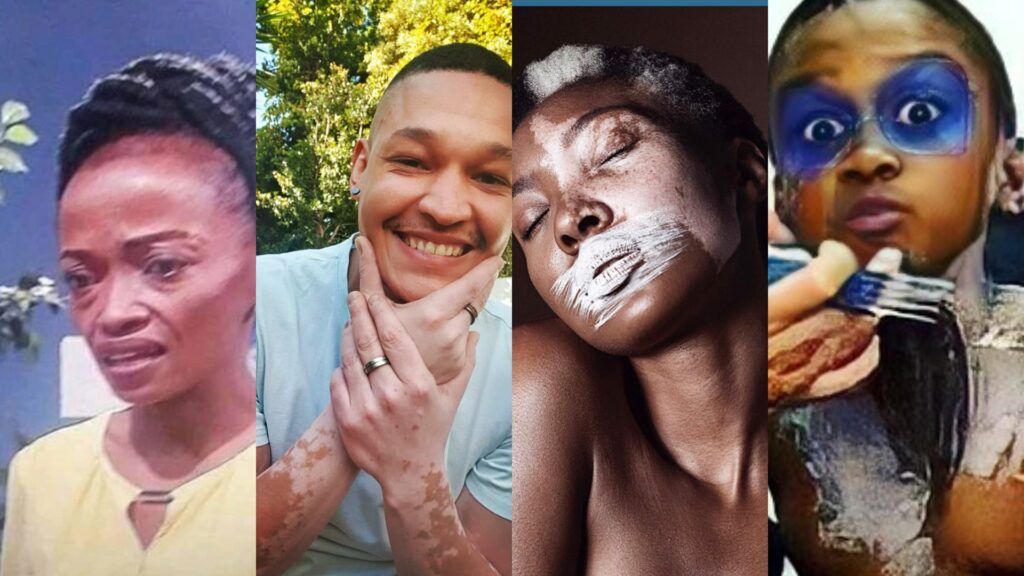 When you’re a celebrity most people expect you to look perfect and to have a perfect health. But one thing we forget is that celebrities are people as well just like the rest of us, meaning they can suffers the same health and bodily conditions just like everyone else.

So we have listed 7 celebs who have shocking or bizarre body conditions that most people were not aware of.

1. Brighton Ngoma is our 1st of celebs with bizare body condition

Brighton Ngoma is a South African actor best known for playing a lead character of Quinton Nyathi. He is also known for his roles in the television serials Invictus, Who Am I? and Master Harold and the Boys.

Brighton has got a skin condition that he suffers from. This condition is called Vitiligo, a condition whereby the melanin of your skin gets depleted and you lose your original skin color to just white.

Even though this condition is hardly noticeable on Brighton, he still opened up to the public about it. If you look closely at his hands you will notice it.

2. Warren Masemola is the second

Warren Masemola is a South African actor popularly known for portraying Lentswe Mokethi on the soap opera Scandal! Most people has seen Warren with bald heard throughout his life and they never question why. They probably thought its his favourite hairstyle but thats not true with Warren.

Warren is bald heard because he suffers from autoimmune conditions of hair loss called alopecia. He experienced lot of distress growing up but became okay with it in his adulthood. The most painful thing is that comedians makes jokes about his bald heard and when he try to correct them they tell him “hold up Warren. its a comedy!” [ ¹]

Ontiretse suffers from Dwarfism, a condition of shortness in height that results from a genetic or medical condition. She suffered discrimination growing up but she told herself that she won’t be defined by what people say. Now she is living her dream as an actress.

Leleti Khumalo is a South African actress best known for playing a lead role in Sarafina and for playing Zimele Bhengu’s wife MaZulu Bhengu in Imbewu the seed.

She is suffering from a Skin condition of Vitiligo just like Brighton Ngoma. She tried to cover it up with clothes and long hair extensions but it has spread to her face and it got worse. It appeared to be a bizarre to fans but they’re getting used to her new God given appearance.

5. Masechaba Moshoeshoe is the fifty  of celebs with bizarre conditions

Masechaba Gloria Moshoeshoe is a South African actress, television presenter, radio host and voiceover artist, best known for hosting the talk show The Big Question and for playing Madika. She started off as a sports presenter on the former TV1’s Junior TopSport and SABC’s ex Astra Sat, a satellite channel. [ ³]

Masechaba Moshoeshoe had become ill. People hope for her good health and long life once she leaves the television industry without admitting her disease. She then announced she had been diagnosed with hypertension.

She is not suffering from any bodily condition but an illness that has affected her full body appearance. The woman, who used to be full-figured and fat, has slimmed down. This is might be because of the illness. [ ⁴]

Their marriage or relationship always draw attention to people just like the Grand P relationship with Eudoxie Yao, because their woman appear too curvier for these midget statured men.

7. Kgothatso Iman Dithebe is the last among celebs with bizarre body conditions

Kgothatso Imani Dithebe is a South African model. She is best known for entering the top five of Miss South Africa in 2019. Though she didn’t win it, for her it was her greatest achievement. She entered the beauty pageant once again in 2021 to show the kind of spirit she possesses, a spirit of never giving up until you win.

Kgothatso suffers from Vitiligo just like Brighton Ngoma and Leleti Khumalo. Her Vitiligo spread on the left side of her face but she looks really beautiful. Despite her condition, Kgothatso is doing very well in the beauty pageant world.