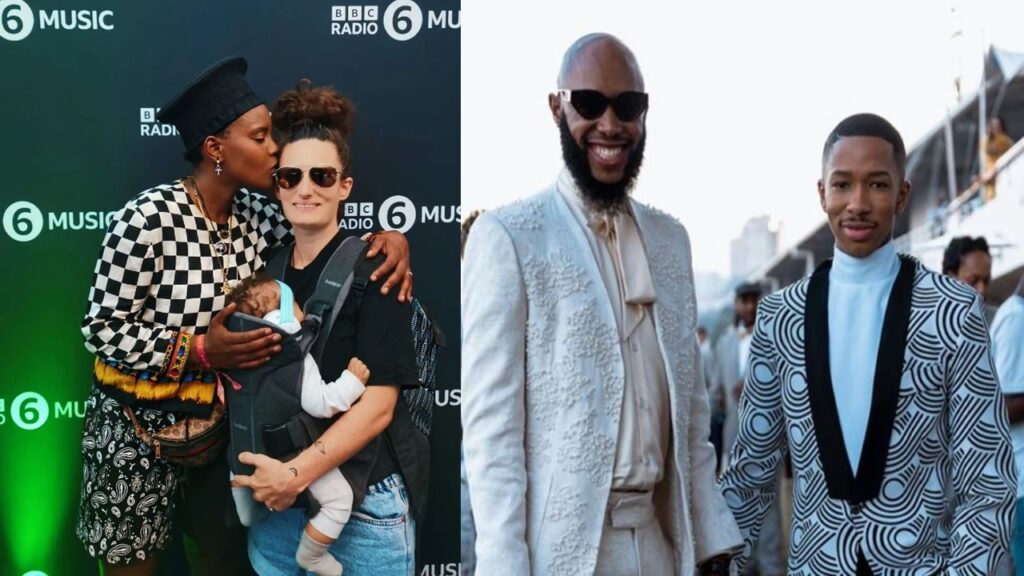 20 gay and lesbian celebs couples we ever had in South Africa.

In the past, homosexual marriages used to be a crime in South Afica and is still so in other parts of the world. So, since it was legalized in South Afica, we have quiet a number of samesex marriages. So, in this article we are going to discuss 20 gay and lesbian celebs couples we ever had in South Africa.

Latoya Nontokozo Buthelezi, known professionally as Toya Delazy, is a London-based South African singer, producer, pianist, dancer and performer from Zululand, known for her signature music genre called “AfroRave”, infusing techno, drum&bass and beats with Zulu lyricism. Toya Delazy is a lesbian woman who is married to Alisson ‘Ally’ Chaig. They have been married for more than a decade since they tied a knot in October 2021. Another fact is she the daughter of Mongosuthu Buthelezi. [1] The singer made it on our list of gay and lesbian celebs couples since she is in same sex marriage.

Thandiswa Nyameka Mazwai is a South African musician, and is also the lead vocalist and songwriter of Bongo Maffin. She is also known as King Tha. She is in a same-sex relationship with her partner Anika of white descent. They have been together for more than a decade as well and they seem to be happy together. King Tha doesn’t like sharing her relationship with the public much often but does share some of their moments on Instagram.

Thulasizwe Siphiwe Dambuza known professionally as Lasizwe, is a South African social media personality, actor, television presenter and YouTuber. In July 2022, Lasizwe Dambuza and the ex-partner of Somizi, Mohale, came public with their Romantic relationship. People who were speculating of either the two were an item or not came to know the truth when Mohale and Lasizwe came to attend Comedy Central Roast of Khanyi Mbau. It was clear that the two were a couple as they held hands in public.

Marc Eugene Lottering is a stand-up comedian from Cape Town, South Africa, and grew up in the Retreat townships of the Cape Flats. In a 2009 interview, Lottering told MambaOnline that he came out as gay in 2000. On January 12, 2010, he married his partner of 10 years, Anwar McKay. The two got married in a private ceremony after dating for 10 years this means they’ve been together for more than two decades. They came to a decision o marriage after finding concluding that they loved each other very much.[2]

Letoya Makhene is a South African actress, singer and TV personality. She is well known for acting in South Africa’s famous soap operas, Isidingo and Generations:The Legacy. She is one the celebrities in same-sex relationships and marriage. Latoya is married to Lebo Keswa. The two tied a knot in 2020 after Lebo had paid Latola to Latoya’s family. Latoya was previously married to Priviledge Mangezi, a man of Zimbabwean descent. Her marriage with Priviledge was blessed with three children but they still divorced after 9 years in marriage.

Armand is an actor working out of Cape Town and Johannesburg. He graduated from City Varsity School of Media and Crea@ve Arts in 2009, at the top of his class. Since then he has worked in tv, film, theatre and radio. Over the past 13 years, Armand worked extensively, locally and abroad as an actor. In 2019 he came out to the public as a gay though family and colleagues already knew his status. Armand is dating Tannah Haris and they have been together for quite some time. According to Armand the guy he is dating is really incredible, helps him grow and makes him happy.[3]

Sade Giliberti is a South African actress and producer. She is known for films such as  The Devil You Know, Spectrum London and The Chelsea Detective. The actress is a same-sex relationship and she seems happy. Sade loves to share her relationship happy moments with her partner Chané Scallam. People who follow her on social media knows she is not ashamed to show her lesbianism and who she dates.

Nakhane Mahlakahlaka (born as Nakhane Lubabalo Mavuso) is a South African singer, songwriter, actor, and novelist. They are formerly known under the stage name Nakhane Touré. Nakhane is non-binary, meaning as an individual he is not referred to as he or she but they. He considers not his gender as either male or female. Nakhane is dating Christopher Wilson his boyfriend making him one of the celebs on the list of gay and lesbian celebs couples. The song titled Christopher is about him after they met online.

The singer used to go to church but the singer and author ended his relationship with Jesus Christ after he gave in to the urge of wanting to date other men.

Roberto Kyle is a South African actor and vocalist He is best known for his role as Lee-Roy Foster in the soap opera Arendsvlei. His relationship status is not confirmed but we suspect that he is dating Jarrid Geduld as they mostly shoot pictures together and posts them on Instagram. We saw it fit to include him on our list of gay and lesbian celebs couples.

Khaya Dladla is a South African actor, model and musician. He is best known for the role “GC” in the television soapie Uzalo. Khaya was married to his longtime boyfriend Mercutio Buthelezi in 2020. In 2022 they called it quits and divorced after almost two years in marriage. The couple was once was one of Mzansi’s favourite gay couples in celebville, and they were completely inseparable.

They used to serve major couple goals on social media with their matching outfits, and vacations. After breaking up the two deleted each other’s pictures on Instagram and other social media platforms. Today we do not know yet who Khaya Dladla is dating.

Simphiwe Dana is a South African singer and songwriter who works mostly in her mother tongue, the Xhosa language. Dana is also known for her creative social commentary and activism through music as a political art form. Dana made it on our list of gay and lesbian celebs couples. She came out as gay in 2020 after announcing her status in Twitter post. In 2021 it was reported that Dana was getting married to her girlfriend Pumeza Matshikiza, an Opera singer from South Africa. But in 2022, the couple was reported that they broke up in less than a year of being married to each other.

Selbeyonce Mkhize is a South African actor and radio personality who hosts the popular 1223 Show on Ukhozi FM and plays the role of Lulu in the hit show “Imbewu.” He is openly gay and lost the man he’d hoped to marry. “I don’t know if I can love again,” he says. He met his late partner, Sipho Maluleka, after a friend picked him up at Joburg’s OR Tambo Airport in 2015. But his dream of marrying his “amazing and kind” lover was dashed when Sipho was killed in a car crash in January of 2021.

Mandisa Nduna is a South African actress best known for her starring role as Thuli in the eKasi+ drama series Hustle. She first rose to fame as one of the final four contestants on the second season of the SABC1 reality competition series Class Act, in 2011. Mandisa dated Thishiwe Ziqubu, a South African actor and director, before they called it quits. The couple used to be an Inspiration to the LGBTQ community as they served couple goals. The two were together for almost four years but their relationship couldn’t survive rough patches which led them to break up in October 2020.

Mpume Mthombeni is a South African actress well known for her character Agatha on etv medical drama Durban Gen. While her life on screen as Agatha is so complicated, Mpume Mthombeni is a carefree spirit in real life. The lovely actress is a lesbian and has a girlfriend. Not much is known about her girlfriend but Mpume has shared pictures of her on social media. In 2014, Mpume shared a picture of herself holding her girlfriend’s hand with a ring.

The actress and TV personality left her fans astounded when she resorted to social media to publish a photo of a woman she was dating. Many people were surprised to learn that Nomsa dated women and had children. She eventually said her vows with a woman named Zandile Shezi. Whom she remains married to, to this day.

Initially, she dated to Unathi Ndondzwana, who died after suffered a stroke in 2013. She is a lesbian and married to longtime partner Zandile Shezi, where the wedding was celebrated on 28 September 2019 at a ceremony in Alexandra, Johannesburg. She has two children: Olwethu, Lindi

Somizi Buyani Mhlongo is a South African media personality, television presenter, actor and choreographer. In 1992, he appeared on the musical and political film, Sarafina! which gained him prominence. He came out as bisexual after his girlfriend Palesa Madisakwane found out that he was dating an unnamed man. Later he described himself as gay, and the relationship with Madisakwane ended.

In 2017 rumors surfaced that he was dating South African model and entrepreneur Mohale Tebogo Motaung. The two confirmed these rumors in 2018. Mhlongo proposed to Motaung while on their vacation in Paris, France. The two were married in a traditional wedding on 28 September 2019, and they had a white wedding on 30 January 2020. In 2021 Somizi confirmed that the two were getting divorced after abuse allegations from his partner Mohale.

Linda Majola is a South African actor and Tik tocker. The star is gay and has acted on South African drama series The Wife as gay. He never revealed who he dated in real life but in recent news he openly said that he was tired of being single. In other reports it was said that Lindah had a crush on Somizi Mhlongo and was ready to mingle with him.

PJ Powers is a South African singer and performer. She became a household name in southern Africa after the widespread success of the song “Jabulani”. PJ is a proud lesbian by sexuality but she claims that she doesn’t define herself by her sexuality. Information about her husband or wife is not known, she probably keeps it private.