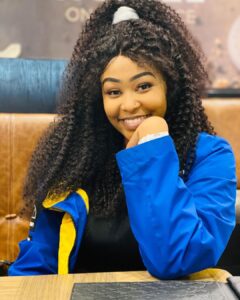 Oratile Maitisa is a South African actress well known for her role on Skeem Saam as Eunice. She was born on the 1st of March 1999 in a township called Seshego, Zone 1. This township is situated on the outskirts of Polokwane in Limpopo province.

In 2005, Oratile started her primary school at MP Malatjie Primary School which is situated in Seshego Zone 8. She attended Capricorn High School in Polokwane later on and completed her high school in 2016.

Oratile never attended University but she is still deciding on what to study but she has her eye on Industrial Psychology.
She also wanted to attend Africa Film Drama Art (AFDA) School to study a Bachelor of Arts degree in live performance. [1]

Oratile Maitisa started acting when was still a teenager. She was 13 years old when she made her first appearance on Skeem Saam. Oratile plays the character of Eunice on Skeem Saam. Eunice is the best friend of Pretty (played by Lerato Marabe), keeping fans riveted every weekday with their schoolgirl antics on the hit SABC1 show. We all know Eunice as the sweet and innocent young girl who has big dreams and decided to attend University in the City of Gold where success is believed easier to achieve. [2]

Oratile likes singing and dancing and she is good. She also loves fashion and helping her mom with her sewing business. The Skeem Saam star loves acting on Skeem Saam mostly on the educational part where she feels she is making a difference.

1. She has never been to University but she is planning to go and study Social Work.

“I really want to help people more especially because of the things I’ve experienced in my life as a child.” She said.

2. She knows how to drive but does not have a driver’s license yet!

3. Oratile is a planned baby, her mother wanted a baby girl that she planned every single step to make show she conceive one.

4. She is very good at singing and dancing. Skeem Saam Eunice, attended dancing classes in Polokwane.

5. She is a very spiritual person, she is even an Evengelist at her Church![3]

6. She has got a boyfriend but she doesn’t want to reveal his identity and she believes the relationship is promising.