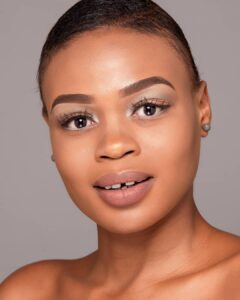 Moshine Mametja is a 27 years old South African actress born on 18 October 1994 in The Oaks Ga-Sekororo, Limpopo Province in South Africa and she was raised in Phalaborwa. She speaks English, IsiZulu, Sepedi and Xitsonga. Moshine came to popularity after starring on Diep City as Ausi Momo. 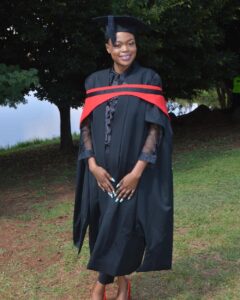 Moshine at graduations probably at TUT

She attended school at Hoerskool Frans du Toit. The star furthered her studies at Tshwane University of Technology Art Campus and obtained a National Diploma in Drama. 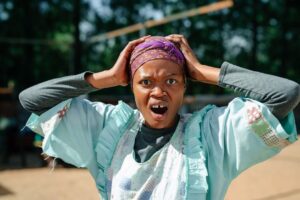 Moshine Mametja started her career in theatres were she was ironing up her acting skills. She currently on tour of “StageFright”. In 2021 Moshine landed a role on Diep City as Ausi Mary, a supporting recurring role who works with Sne as a cook. She is nosey and knows everything that is happening at Diepsloot.

After the premiere of Diep City, Moshine went on Facebook to show her gratitude to Black Brain Pictures.

“I would like to thank @blackbrain_sa for allowing me to continue living my dreams! Bra @Mandla_N I am so honored and blessed to be in the same circle as you, for choosing me and trusting me to deliver to the best ability I can. I won’t forget you. You are such a talented inspiration, may the Lord keep flooding you with your wildest desires,”she said.

Moshine Mametja is a model

Apart from being a dexterity actress, Moshine is a well-known model. In 2008, she entered Miss Maruleng and obtained the 2nd Princess prize and in 2009 she emerged as the 1st Princess of Miss Oaks. ¹ In June 2021 Moshine re-entered the beauty pageant because she believes she is smart and has the body, beauty and confidence to win the competition.