Mishka Gounden, born on March 08, 1994 (age – 27), is a South African actress, Radio DJ, Dancer, Choreographer and Singer. She is well known for playing Mira Rampersad on Imbewu the seed and for Keeping Up with the Kandasamys (2017). In 2017, her private videos went viral after her ex – boyfriend leaked them. 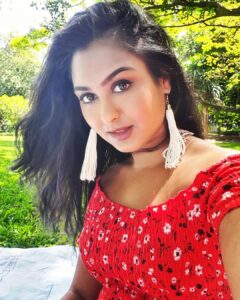 Mishka Gounden was born on March 08, 1994, probably in Durban in KwaZulu Natal Province in South Africa. She didn’t start off as an actor but a Radio personality or DJ firstly on an online station Megazone Bollywood and also as on-air traffic reporter on the afternoon drive show at SA’s biggest Indian station, Lotus FM radio but was later fired for causing disrepute at SABC because of her leaked videos’ controversy. 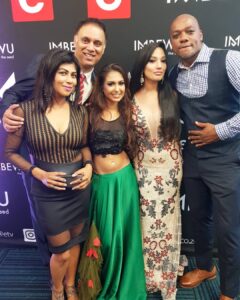 Mishka Gounden with the Imbewu the seed crew

Gounden is an actress who had role on Keeping Up with the Kandasamys in 2017. She is an upcoming telenovela star who has made her debut on Imbewu: the seed. On Imbewu, Mishka Gounden plays a recurring role of Mira Rampersad, the second daughter of Nerupa ( played by Jailoshini Naidoo) and Pranav Rampersad ( played by Koobeshan Naidoo). She plays alongside Kaylin soobramanian (portraying Thu Sheleni) and Brightness Zulu. 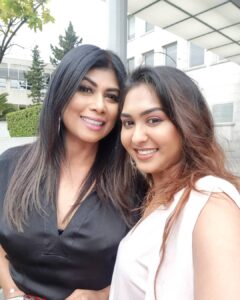 In June 2018, rising radio star and actress Mishka Gounden was heading to work at her dream job at Lotus FM when she received a call from a colleague who advised her to pull the car over S.e.xy videos she’d taken of herself and sent, she says, only to the popular radio jock and a former colleague she had a bit of a crush on, Fahim Jamadar, had surfaced on WhatsApp and were spreading like wildfire through Durban’s conservative Indian community. She immediately turned back and went home.

Gounden send the videos to Jamadar in 2016 because she thought there was a development of romance between them. But to her surprise, the videos were leaked obviously by Jamadar because she send them to him alone.

Mishka Gounden had to obtaine an interim protection order against Jamadar, which includes the allegation that he assaulted her outside a Durban bar and restaurant, and opened a case of crimen injuria, accusing him of leaking the p.r.ivate videos.