Gomora actors, roles and their ages

Gomora actors are fabulous and we are going to explore their roles on the drama and their real life age. Gomora is a South African television drama series produced by Seriti Films. Its aired on South African channel Mzansi Magic. The drama series replaced  Isthembiso. 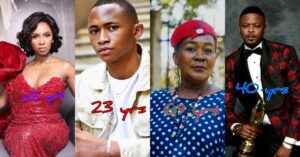 Gomora actors, roles and their ages

Katlego is one of the starring amongst Gomora actors, she was born on 7 November 1978. She plays the character of Onthatile “Thathi” Molefe-Ndaba. She is 43 years old.

Zolisa Xaluva plays Melusi Dlamini, an uptight, strict father. He previously had a relationship with Thathi and is now married to Gladys. The star was born on 13 June 1981 therefore he is 40 years old.

Connie Chiume plays Mam’Sonto Molefe, Thathi and Pretty’s mother. She is the puppet master in the township who orchestrated the hijacking which ultimately led to her son-in-law’s death. Connie was born on 5 June 1952, she is 69 years old.

Thembi Seete plays Gladys Dlamini A street-smart and tough social worker who believes in uplifting the community. She was born on 25 March 1977 thus she is 44 years old.

His full name is Ntobeko Senzesihle Sishi (born 1998) is one of the starring Gomora actors. The star is 23 years old. He plays Ntokozo Dlamini, the son of Gladys who seeks affection from his father Melusi, to no avail.
Siphesihle Ndaba

Sicelo Bhuthelezi was Born on 20 March 1985, in Tembisa, he is 36 years old. Though he is 36 years old he plays Sibusiso “Teddy” Zondo, a teenager who has been adopted by Gladys and Melusi due to the fact that his mother (Zodwa) drinks a lot. Teddy was born with fetal alcohol syndrome, which causes him to be a slow learner.

Sannah Mchunu was born on 19 March 1972, she is 49 years old. Zodwa Zondo is a recovering alcoholic and is Teddy’s mother. She was best friends with Gladys in High School.

Siyasanga Papu is was born on 14th July 1986, she is 35 years old. She plays Pretty Molefe, Thathi’s younger sister. She carries resentment towards her as she has been in her sister’s shadow all her life. As the show progresses, Thati and Pretty are shown to have a better sibling relationship.

Leera Mthethwa was born on 7 December 1990 age 30 years old. She plays Jackie Hlungwani – a no-nonsense teacher at Gomora High School that has a close working relationship with Melusi Dlamini. Jackie has been seen to be very intuitive when something seems to be wrong with her students.

Nandipha Khubone, born in 2000, she is 21 years old, the star is well known for playing Sibongile on Mzansi Magic drama, Gomora.