Charlize Theron is a South African and American actress and film producer. Theron is one of the world’s highest-paid actresses. She is a recipient of several prestigious awards. Which include an Academy Award, Screen Actors Guild Award. And, the Golden Globe Award. In 2016, Theron was named one of the “100 most influential people in the world” by Time. 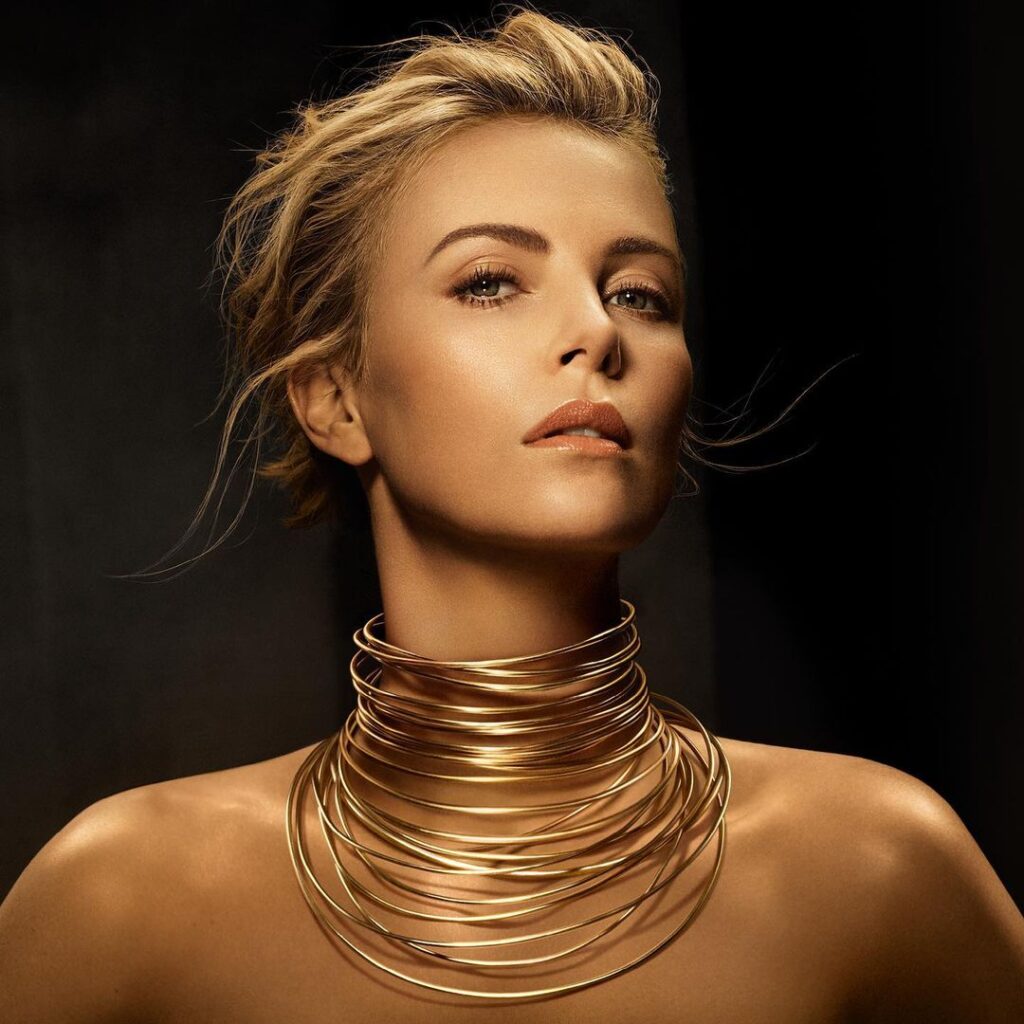 Theron was born the only child of road constructionists Gerda and Charles Theron. Theron hails from an Afrikaner family. So, she has a Dutch, French, and German ancestry. Theron grew up on her parent’s farm in Benoni.

However, her father was an alcoholic. On June 21, 1991 when Theron was still a teenager, her father threatened her mother and her while drunk. He physically attacked them and fired a gun at them. And, in self defense. Theron’s mother retrieved her own handgun and fired and shot her father dead. His death was considered self-defense. So, she did not face any charges.

Theron attended Putfontein Primary School (Laerskool Putfontein), during a period in which she felt as an outlier and not “fitting in”. Furthermore, Theron was frequently unwell with jaundice throughout childhood. And, the antibiotics she was administered made her upper incisor milk teeth rot. Forcing them to be surgically removed and teeth did not grow until she was roughly ten years old.

Moreover, at 13, Theron was sent to boarding school and began her studies at the National School of the Arts in Johannesburg. Although Theron is fluent in English, her first language is Afrikaans. At this boarding school, Theron was able to further her acting and drama knowledge. Aswell as other arts she may have been interested in. 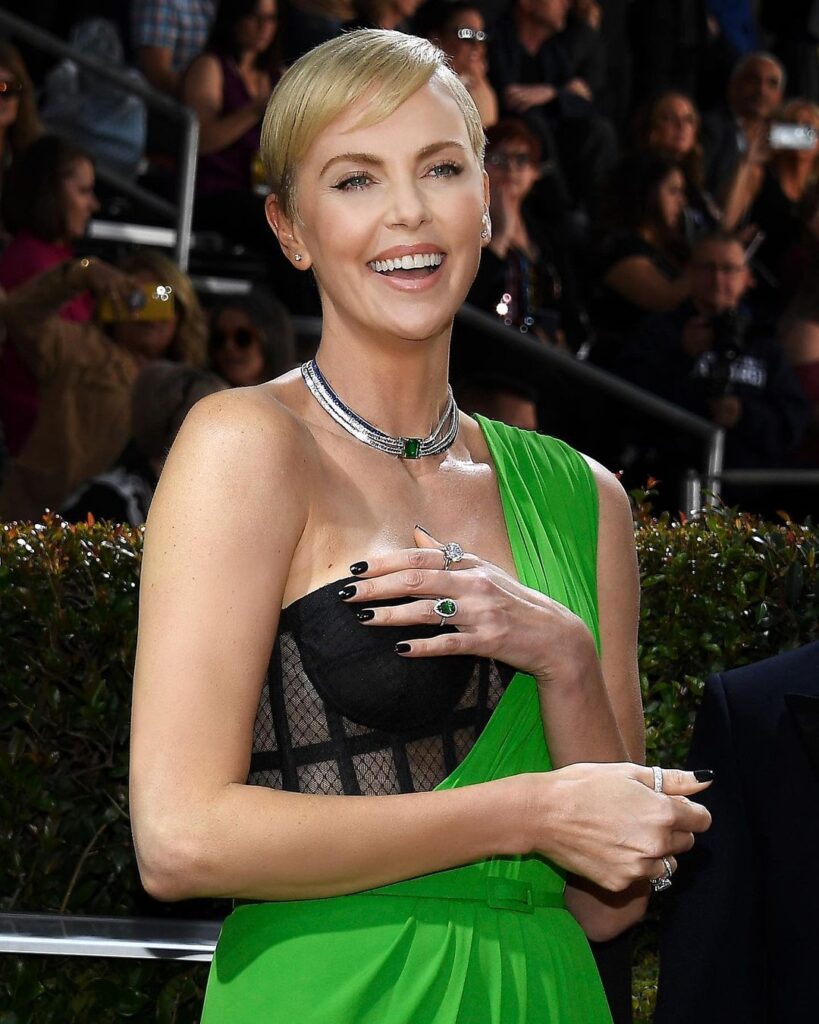 A stunning image of the actress Charlize Theron.

Theron started off as a model and fter modeling throughout Europe. Theron and her mother moved to the U.S, New York City, and Miami. In NY, she trained as a ballet dancer at Joffery Ballet School. However, she later sustained a knee injury. Theron met talent agent John Crosby while cashing cheques at a bank. He introduced her to an acting school. However, Theron only gained more recognition in the late 90s.

By playing the lead in the films “The Devil’s Advocate,” “Mighty Joe Young,” and “The Cider House.” Her portrayal of Aileen Wuornos in “Monster (2003)” earned her critical acclaim. She won the Silver Bear and Academy Award for Best Actress for portraying the role. For her role as a sexually abused woman seeking justice in the drama “North Country” in 2005. And went on to receive another Academy Award nomination.

Theron has two adopted children; a daughter, Jackson, in March 2012 and another daughter, August, in July 2015. Since childhood, Charlize has been interested in adoption. At the time, she became aware of orphanages and the overflowing children. She revealed in April 2019 that her first daughter, Jackson (7 at the time), is a transgender girl. Theron said, “They were born who they are, and exactly where in the world both of them get to find themselves as they grow up, and who they want to be, is not for me to decide.”

From 1995 to 1997, Theron dated Craig Bierko. It was her first public relationship. Until October 2001, Theron dated Stephan Jenkins for three years. The emotions he experienced following their breakup inspired some of the songs on Third Eye Blind’s third album, “Out Of The Vein.”

How tall is Charlize Theron

Charlize Theron always steals the spotlight on the red carpet. She stands tall at 5 feet 10 inches or 1.78 m (178 cm). Theron’s beautiful height and poise helped her gain recognition. She won a local modeling contest while in school and moved to Milan, Italy, on a one-year contract.

The exact estimate of Charlize Theron’s net worth is unknown to the general public. She is known to be worth way over $100 million. In 2006, Theron ranked 7th in an article published by The Hollywood Reporter listing actresses in Hollywood earning up to $10 million for a film. In 2019, Forbes ranked Theron as the ninth highest-paid actress in the world, with an annual income of $23 million.

Theron came to international prominence in the 1990s. By playing the leading lady in the Hollywood films The Devil’s Advocate (1997), Mighty Joe Young (1998), and The Cider House Rules (1999). She received critical acclaim for her portrayal of serial killer Aileen Wuornos in Monster (2003).

For which she won the Silver Bear and Academy Award for Best Actress. Making her the first South African to win an Oscar in an acting category. Moreover, Theron also received another Academy Award nomination for playing a sexually abused woman seeking justice in the drama North Country (2005).

She also received praise for playing troubled women in Jason Reitman’s comedy-dramas Young Adult (2011) and Tully (2018). Aswell as for portraying Megyn Kelly in the biographical drama Bombshell (2019), receiving a third Academy Award nomination for the last.

Since the early 2000s, Theron has ventured into film production with her company Denver and Delilah Productions. She has produced numerous films, in many of which she had a starring role, including The Burning Plain (2008), Dark Places (2015), and Long Shot (2019). Theron became an American citizen in 2007, while retaining her South African citizenship. She has been honoured with a motion picture star on the Hollywood Walk of Fame.